Panniculitis is an inflammation of the panniculus, the layer of fatty and fibrous tissue just beneath the outer layers of our skin. This layer of the skin looks like a honeycomb, with globules of fat separated by walls, or septae. Like most medical conditions, panniculitis can have many underlying causes. Alpha-1 Antitrypsin Deficiency is one of those causes. There are many other causes, including diseases that involve widespread inflammation of the body such as lupus (systemic lupus erythematosus) and rheumatoid arthritis, and reactions to some drugs, including corticosteroids. 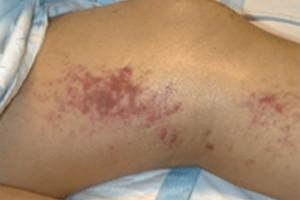 Panniculitis typically appears as raised red spots on the skin which may break down and give off an oily discharge. While panniculitis spots (called nodules) may appear anywhere on the body, the most common places are the thighs, buttocks, and areas subject to injury or pressure. Panniculitis nodules sometimes appear after some injury. This includes injuries that would be considered minor in most people – vigorous exercise, intravenous injections, and cryosurgery (surgery involving freezing the skin). Panniculitis spots may develop into deep ulcers in the skin, with tissue breakdown, called necrosis. Such necrotic spots are usually painful to the touch. The medical term for this is “necrotizing panniculitis.”

Panniculitis can be annoying and painful, even disabling. However, it is the rarest of the well-known complications of Alpha-1. In those with Alpha-1, the inflammation and development of panniculitis has a clear similarity to the development of emphysema. In both the skin and the lungs of Alphas, there is a lack of Alpha-1 Antitrypsin, which normally balances the action of proteases – enzymes that break down proteins as part of normal body functioning. When the Alpha-1 protein is missing or abnormal and not functioning, this balance breaks down. Proteases within the body can then damage the structures underlying the skin (in the case of panniculitis) or the support matrix of the lung (in the case of emphysema). Physicians in France first described Panniculitis due to Alpha-1 in 1972. They described a young woman with severe deficiency of Alpha-1 Antitrypsin who developed the characteristic red nodules and painful skin ulcers.

Since that original report, fewer than 100 cases of panniculitis in those with Alpha-1 have been reported in the medical literature. In the National Heart, Lung, and Blood Institute (NHLBI) Registry of Individuals with Severe Deficiency of Alpha-1 Antitrypsin (1,129 participants), only a single Alpha reported having panniculitis. Panniculitis in Alpha-1 is found in different phenotypes, some with severe deficiency of serum levels of Alpha-1 Antitrypsin (typically PI*ZZ) and others with only mild deficiency (typically PI*MZ). In one reported series of 26 patients with panniculitis and Alpha-1, 62 percent were PI*ZZ; 15 percent were PI*MZ; 8 percent were PI*MS; and 4 percent were PI*SNull. In the remaining 8 percent, the phenotype was not reported. Panniculitis seems to occur equally among men and women. The mean age of onset is about 40 years old.